When self-doubt battles with desire

I ripped off some band-aids these past few weeks.

Long story short: I had made a decision that was based on fear. I didn’t realize it in the moment, but I had decided to participate in a project to stave off self-doubt.

God’s Spirit is funny how it works with us. I knew instantly that it didn’t feel quite right. But it took me awhile to understand why. After wrestling with it, I went back and undid the decision. I owned it as a mistake, and course corrected. (I’ve learned this one over and over—it’s never too late to course-correct.)

At first, I was proud of myself for going back and correcting a decision I had made that didn’t line up with core values. It felt good.

But then, sure enough, the very self-doubt I hadn’t wanted to face started to kick-in:

You’ll never be able to do this without those band-aids.

You can’t do this on your own.

Then came the voice of desire—the genuine desire that had factored into that initial decision:

But I want this so much. Just because I wasn’t supposed to go in *that* direction, doesn’t mean I still don’t desire these good things God has put on my heart.

And to paraphrase an old country song, “The Race is On” by Sawyer Brown:

There are no winners in your internal battle between self-doubt and desire.


Self-doubt tells you that you’ll never get what you want:

It reminds you of all the times you’ve let yourself down. Or been let down by others.


Desire ratchets up its voice in response:

But I so want. . . [that relationship, that job, that security, that recognition, that thing for my child, that shot at meaningful work. . .fill in your own blank].

They’re good things, those things you desire. They’re not all bad.

But your self-doubt is having none of it. And that just fans the flame of your desire.

The battle can feel overwhelming.

Then a call to a supporting, loving other. A sister or a friend or a loved one who reminds you of the power of one word:

What if neither your self-doubt nor your desire holds the keys to the kingdom when it comes to your future? What if—instead of competing within you, they could help you gain courage?

Your self-doubt, as much as it Drags You Down is trying to help. It’s terrified. It’s sounding the panic alarm desperately trying to get your attention.

Become aware of that voice of self-doubt. Don’t let it take hold within. But don’t rationalize it away. Instead, get curious about it. Put your attention on it for a moment, and let it know you see how fearful it is: I see you there. And I get it. You want me to rise to this challenge. And you’re scared that I won’t. I’m scared, too. It’s scary to bring honest desires before God. . .to trust in him and in your own God-given abilities as you to take steps toward growth and new life. It’s OK to be fearful, but I can’t let you drive.


And then turn to your desire with the same loving attention:

I hear your sense of urgency. I see the clock ticking. . . the bank account dwindling. . .the relationship dissipating. . .the numbers on the scale gaining. And I’m aware of past heartaches and dashed hopes. Can you sense that I’m here with you? That God’s here with your too? If you’ll give me just a little space to breathe, I’ll see more clearly that next right thing.

As you care for both your self-doubt and also your desire, you honor them without letting them lead.

When you acknowledge your self-doubt before God, that part of you will feel validated and relax just a bit. And the same goes for your desire. In my experience? God’s heart is closest to us in the honesty of our most vulnerable moments of need. He doesn’t promise outcomes, but he does promise to be with us. His Spirit weaves in, through, and all-around. Those internal battles that drive you crazy? That make you feel weak and needy and foolish? Those are the parts of you he just might long to love on the most. 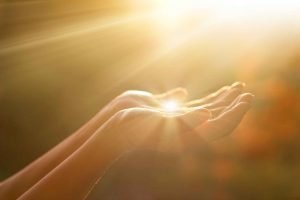 You can lay open your hands with them both before God.

Try it. Open your hands and imagine desire in one, and self-doubt in the other.

And I’m coming to believe that this is a space that is Holy Ground.